Two major events marked the beginning of the week, for the Moroccan bloggers: The Green March and Saddam Hussein's death penalty. But only one event got the most attention. It's the first blog meeting held in Agadir last week end. 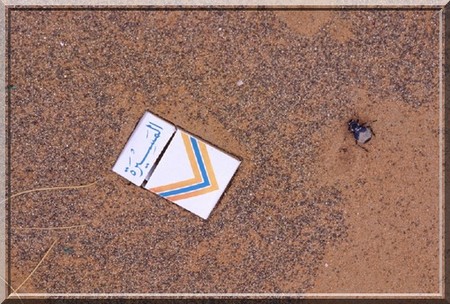 Moroccan bloggers(Fr) discussed the Green March, and remembered the euphoria that went along with the spectacular event, 31 years ago.

Samir explains why is November the 6th a holiday in Morocco.

So today the Moroccan people have been celebrating the 31st anniversary of the Green March that helped the country peacefully retrieve it southern provinces from Spain under the Madrid accords signed in 1975 by Morocco, Spain and Mauritania .

As usual, Too Banal plays with the words, and the green March which in Arabic is “AL Massira Alkhadra” becomes La mass ira(Fr), which means the crowd will go.

Laurent Bevas posts(Fr) an article about the Sahara issue published in Le Monde Dipomatic(Fr). But the “copy-paste” of the article made Imane, his first commentator uneasy(Fr).

Mohamed Laroussi‘s father died 14 years ago, and it was on November the 6th.

Laroussi celebrated Monday a march, not the green one, but the one his father took toward peace and eternal rest. He posted(Fr) a touching letter to his late father asking him to enjoy life in heaven.

It's a big mess down here, my beloved dad.

To my not so big surprise, only few Moroccan bloggers(Fr) posted about the Saddam Hussein's death sentence.

>Who's next? whoever doesn't close his mouth will have it sewed

Myrtus calls the sentence The verdict

That is all I can think of calling this, the conviction of Saddam Hussein for the murder of 148 citizens of his country. Their crime? Being unlucky enough to live in a town where some tried to assasinate Saddam Hussein. They were murdered in reprisal.

Even though Attayeb entitled(Ar) his post not for the defense of Saddam, the words he used to describe the sentence show sympathy and affection for the Ex president of Iraq.

Neither Saddam Hussein nor the Green March was as popular for the Moroccan bloggers as the first blog meeting in Agadir. Many(Fr) enthusiastic posts(Fr) about the event(Fr) that became Moroccan-Tunisian(Fr) with the presence of Adib(Fr) and Amine(Fr).
Ahmed wrote a long post(Fr) describing in detail the meeting, he definitely had very good time.

Bettar Nadia was as nostalgic as Ahmed, and depicted in detail(Fr) the two days meeting.

All those who participated in the meeting wrote the same sentence:

Thank you my friends, see you soon God Willing!

M.S.Hjiouj is finishing his first novel which took him one night to write(Fr).

Ahmed(Fr) celebrated his birthday yesterday and loulou dedicated(Fr) a whole post for the event.

Label Ash has a new look, more elegant and with more captivating posts.

Thanks to a tip from Bla Fransya(Ar), I discovered an interesting blog with quiet a unique story. Miloud Chelh(Ar), the author, used to write funny posts about his different jobs: painter, waiter..

Lately, he started writing for Al Massae(Fr), a popular newspaper launched by Rachid Niny(Fr). Miloud writes mostly standing up .He doesn't have time to seat, he explains. He still works as waiter.