I went to Morocco for a long vacation. Once back to my home sweet home, I had to deal with my son's adenoids which caused me to stay away of my weekly roundup. Thank God, everything is just fine now. So here I am, back to my favorite hobby of spotting the most original Moroccan blogs and bringing them to you so you can see, by yourself, how wonderful is the Moroccan blogosphere (Blogoma) and how interesting is to be part of it.

It's even more interesting to meet the bloggers(Fr) in person, and I had the privilege(Fr) to talk(Fr) to some(Fr) of the stars(Fr) of the blogoma. I discussed with them and I was amazed by their way of thinking and their emancipation especially that most of them were women.

I have interviews I'll be sharing with you every week, but for now let's have an updated look on the Moroccan blogosphere.

It's now evidence that Morocco is taking seriously his bloggers. After the Jankari scandal, the Moroccan Media is stressing(Fr) the growing number of the blogs in the country. And while some of them tend to not give credit to what they call “a perishable phenomenon,” most of the Moroccan journalists applaud(Fr) the emerging of the blogs as another form of journalism in a country avid of more forms of expression.

A growing number of Moroccan Internet surfers have become bloggers this year due to cheaper Internet access, the general availability of ADSL and the launch of a number of local blog platforms. Current developments in the already diverse Moroccan blogosphere include the creation of an Arabic-language blog platform and an Internet portal combining news, a subject directory and a blog platform.

According to an article published by Magharebia.com, the increased access has encouraged a number of Moroccan businesses to launch their own platforms. Blogjahiz.ma(Fr) is the major Moroccan platform at the present. The immense popularity of blogs among young people has led to the recent launch of Marblog.com(Fr) by Multimedia Studios(Fr).

“The dominance of French in the Moroccan blogosphere is beginning to lessen as Arcanes Technologies’ recently-launched Blogjahiz is the first Arabic-language Moroccan platform.”

Says the writer of the article.

We all know by now that Larbi(Fr) would love to be a more normal blogger. But hey, when it comes to blogging, the readers are the only judges. And they decided(Fr) Larbi was a special(Fr) blogger.They are not only Moroccans(Fr) but from different countries(Fr) with their interest for Moorcco(Fr) as a shared quality.

The reason of this consensus is that Larbi launched Maroc blogs.com an aggregator of Moroccan blogs. And it's already gaining a big audience and is of a big help for me. 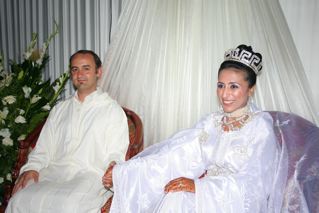 Many things happened while i was in Morocco. Nadia(Fr) married Blaise(Fr), and M.S Hjiouj'blog(Ar) changed the look.

Hjiouj is posting a series of interviews(Ar) with some popular Arab bloggers(Ar), among them Ahmed Bla Fransya(Ar)and Haitham Sabbah. Yes, it turned out Haitham has fans even in Morocco!

By the way Hjiouj is among the Arabic blogs selected(Ar) for the final of the BOBs, along with Rachid Jankari‘s blog(Fr).

Sonia(Fr) is back after an absence of some long seven months while Chigaf(Fr) didn't updated since her voyage to Paris, three months ago.

Black is beautiful, says(Ar) Anima and Manal promises to never try herself as a chef(Fr).

The View From Fez confirms the already widely known huge popularity of Hayfa Wahbi and announces that Brazil's international soccer player, Ronaldo Luiz Nazario De Lima, is visiting Morocco in December, part of a mission in favor of children.

The Real Madrid player told on Friday the Spanish daily “ABC” he will visit Morocco to try help children by his presence. “I was not born in a Favela (slum), but I grew in a very poor community and I know what poverty means,” he said.

Before leaving you, I would like to thank all those of you who took the time to send me emails asking for the reason of my absence. Being missed feels good.

That's it for today, see you next Wednesday Inshallah;)