Mexico: The last moments of Bradley Roland Will

Journalism seems like a precarious profession to practise in Mexico. It's ranked by the Committee to Protect Journalists (CPJ) as one of the most dangerous places to be a journalist.

The latest tragic example of this came on Friday 27th October, in the southern state of Oaxaca, with the shooting of Brad Will. Brad was in Oaxaca as a journalist for New York City Indymedia, trying to get stories out about the protests in Oaxaca (for up-to-date accounts and context of the crisis in Oaxaca, read my GV colleague David Sasaki's latest post). While filming skirmishes between paramilitaries and protestors in Santa Lucia on Friday afternoon, Brad was shot in the abdomen and neck, and died from his injuries, prompting the CPJ to call on the government to investigate Will's death. Now Indymedia has released the tape that was in Brad's video camera when he was shot.

It's a sixteen-minute video with English subtitles, and beware, the last minute (from 15'30) is very difficult to watch. Click the picture below to launch the Quicktime video (there's a YouTube version without subtitles here). 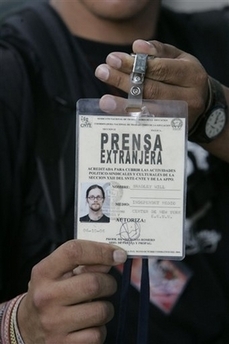 There's more footage at Mexican opposition blog Hoy PG, which points to a piece of unidentified news footage of Brad Will shortly after he was shot – not for the faint-hearted.

It's a moot point whether these are human rights videos per se, but Brad's tape in particular ends so shockingly, and depicts with such brutal suddenness the risks run by those determined to bring human rights stories to light, that it demands to be seen. But as one of the blogs David Sasaki quotes had it, there's a balance to be struck between outrage at the killing of Brad Will, and at the mounting number of local deaths and injuries.

Part of the reason that Brad was in Oaxaca was because there has been scant international attention paid to the growing crisis there. But while cases like Brad's – involving attacks on journalists and human rights activists from information-rich societies – gain huge amounts of traction in global media, in this case bringing Oaxaca to the top of the news agenda, the far greater number of local journalists and human rights activists affected in similar ways rarely receive the same level of coverage.

Think back to Alive In Baghdad, which brought us the Iraqi Torture story a few weeks back, and which finds that its correspondents can receive harassment and intimidation, if not worse. One correspondent, Marwan, was recently kidnapped by a militia group, possibly the Mahdi Army. Iraq is an extreme example, but it's by no means the only example.

At the end of the information chain, all over the world, there are people working to bring to light human rights abuses, oppression, torture, genocide. They are often working under difficult, extreme conditions, whether alone or in a group, undercover or in public, and often without a safety net. They might be journalists, human rights activists, lawyers, doctors, mothers. They often live in fear of repercussions, for themselves, or their families. Most of the time, it's these people – the locals – who are threatened, attacked and imprisoned, rather than foreign correspondents or international human rights workers. Brad Will was working with these people to tell their stories, and suffered a tragically similar fate.

Anyone already doing or supporting this kind of work should take note, and prepare accordingly. The WITNESS manual Video For Change has a chapter on safety and security (PDF, 1.28 MB), an essential read for anyone going into similar situations. The Rory Peck Trust, mentioned in the chapter, offers support to “the families of freelance newsgatherers killed whilst on assignment [and] to freelancers who are unable to continue their work due to severe injury, disablement or imprisonment”, and works in Mexico, as well as South Asia and the Middle East. Feel free to add other useful resources via the comments box.

As for Oaxaca, if you're interested in the background on the protests, in addition to David Sasaki's latest post, you could do worse than read previous updates: