If you've seen the guidelines for this site, you'll know that there are types of footage that we wouldn't post, and circumstances surrounding the shooting of particular videos that mean we wouldn't even link to them. Today's post is about one of those videos.

I was researching a possible post about child-soldiers, when I found a video on a video-sharing site, said to be an interview with a teenage former child-soldier. In the video, the youth makes a number of allegations against the rebel organisation that he claims abducted him, sexually abused him, and sent him out on military operations – allegations broadly consistent with research conducted in his country by respected international human rights organisations.

But unusually for a video carrying this kind of allegation, the youth involved is identified by name, and in the accompanying text, by location. Human rights organisations (and media) would almost always advise protecting the identity of a minor in such a situation (see pages 16 and 17 in this document, for example) – whether by pixellating or obscuring his/her face, by shooting the video so that their face cannot be seen, e.g from behind or in silhouette, or possibly disguising their voice or re-voicing the audio. The photograph below shows how easy it is to pixellate an image to conceal someone's identity. 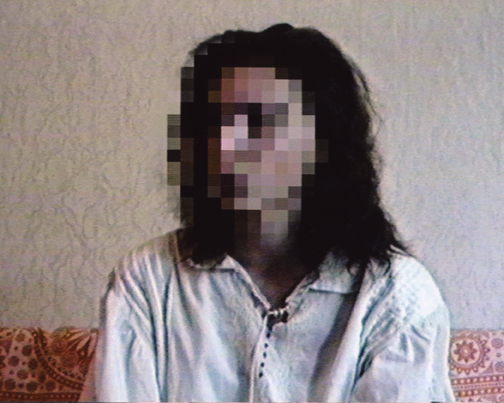 In the case of the video I had found, none of these protocols was followed. I wondered for quite a few days whether to post this video, which I felt brought out many important issues within a conflict where the recruitment of child-soldiers is common. It's horrifying testimony (and by no means rare), and the youth's story deserves to be heard – but the video raises a huge number of questions. Therefore I've decided against showing you the video itself.

The video is quite short, and in it the youth seems to be giving a prepared statement – there's no one asking questions for clarification, as there was by contrast in the Alive In Baghdad video a couple of weeks ago. The text accompanying the video states that the army found the boy after he escaped from his abductors, so I have assumed that the army shot the video.

Did the army explain to him clearly and adequately what the video was for, and how it would be used? At no point in the video or in the accompanying text is it made clear whether the boy in question has given his consent to the use of this video online. Was he given a choice of whether to take part, or of when, where and how it would be filmed? He mentions his parents in the video – were they asked for their consent? If we assume that his alleged abduction and subsequent sexual abuse caused him trauma, what support and follow-up was offered to him? How informed can his consent be considered?

As video has become an increasingly accessible technology, it has become easier to use video as a weapon in the information war. In the recent conflict in Lebanon, for example, the Israeli army, Hizbollah and citizens in Lebanon and in Israel used video to collect evidence of alleged atrocities and human rights violations. Whichever organisations collect and release footage and testimonies in conflict situations, they need to be able to answer questions about the origin of testimonies and footage satisfactorily – otherwise they run the risk of seeming exploitative, and perhaps unreliable.

So who released the video I found, and why did they decide not to protect the youth's identity?

I did a simple search for the youth's name and easily found the site where the original video is hosted. It's an official government site. I emailed the editor of the site to ask how they came by this video, and what guidelines they followed in uploading it. As yet I have not received a response to my questions, although I did get an acknowledgement of my email, with the following warning showing just how sensitive an issue this is, both for governments and other entities:

“If you are willing to undertake a research on Child Soldiering, let us say [this country] is the best place. But of course if you do so, you will surely get in to lot of troubles, including threats on your life.”

Troubles aside, it’s clear that in this particular case, the government concerned has clearly not followed the best-practice guidelines that should be employed by any organisation engaged in the welfare of former child-soldiers. The Coalition to Stop the Use of Child Soldiers, a group of organisations working to promote a ban on the recruitment of children under the age of 18 into the armed forces, and to support the demobilisation, rehabilitation and reintegration of child-soldiers into their societies, offers links to international standards for this kind of work that should serve as a useful model.

I have written again to this government website outlining these concerns, and to the person who uploaded the video onto the video-sharing site, asking them to consider removing the video, until they can apply relevant guidelines to it, and I'll report back on what I hear.

The editor also said that

“It is a pity that none of the former government could use the technology to reveal the truth of our country to the world.”

Governments contemplating the use of children's testimony in similar situations, should ensure that they protect children and respect human rights norms on posting sensitive content of this nature. That way they can avoid accusations of exploitation and propaganda.

If you're interested in reading more about children and armed conflict, here are a couple of excellent resources:

Choike has pulled together an array of reports, research, tools and articles on the issue. The Human Security Gateway pages on Children and Armed Conflict point to a huge range of reports. Page 113 in the Human Security Report covers child-soldiers. And the Watchlist's Country Reports on the use of child-soldiers give useful background on countries where this is a particular problem.