China: Let your photos do the talking

While dealing with blocked pages and filter-trigger keywords can get pretty annoying on the wrong side of the internet, for bloggers in China who want some discussion on, say, the highest-level corruption crackdown in ten years, there are always ways to beat the system. This time it just happens that the name—now on the banned list—of one of the key suspects involved is exactly the same as the Chinese word for the yellow chrysanthemum. And who doesn't like the occasional picture of a flower on their blog? 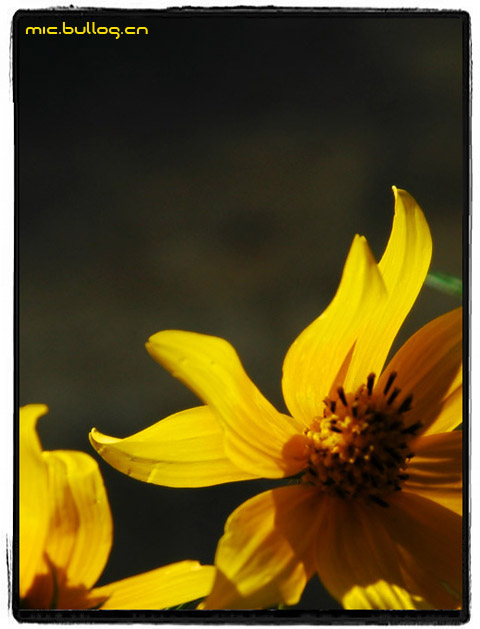 First on the sofa! So yellow

Then you're sitting on shit

You can touch it too

What the hell is it?

Autumn will be over soon..

damnit, you can guess what this is just by looking at the title

Not good
If you could have gotten a shot of a withered chrysanthemum, that'd be meaningful!
Trained until I passed out
I thought it was a poem written by a leader…

The day after tomorrow my eyes
Will enter Autumn.
Bull Terrier
A fire in Autumn.

Also from Bullog, a photo from Li Honglian (李宏剑) posted by 50mm with the title ‘Demolition: Land‘ and no other accompanying text, of a van someone in Fenyan village, Jianli county of Hubei province has turned into a mobile protest sign. The text in the van windows reads: “Give Back [My] Land”. 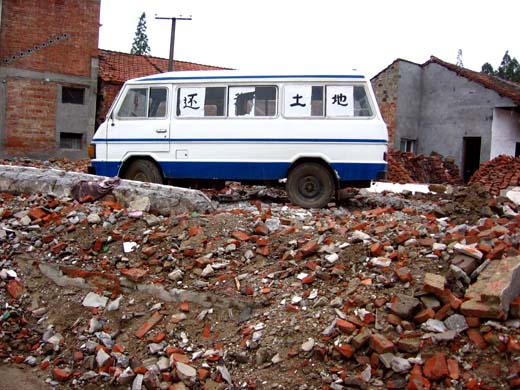 The peasants’ land is gone; before they could only tie a diaper to a bamboo pole, raise it and revolt.
It's much better now that they can go to the cities and be peasant laborers.

It's clear peasant laborers nowadays can earn more money in the South than the North, and even more overseas. Last time I was on the train I met a group who were planning to go to Singapore to build a house for someone. You can see the domestic market no longer meets peasant laborers’ needs to get by.

It's the domestic wage rates that no longer meet peasant laborers’ needs.

I'm so scared..
So many people opposed me.
So I'll just add one more line:
If it's so bad being a peasant laborer they can always go be coolies in another country…

Give the land back to who?
And who will occupy it?
I don't really understand,
And don't want to,
Because,
There's no point.

In blogger/web editor Wen Yunchao‘s webnews weekly roundup, aside from stories of Wikipedia's unblocking in China, one blogger's run from his alleged killers and news of Google's purchase of Youtube is a mention of a hot topic on Bullog these days, those arguing for an end to the practice of Chinese Traditional Medicine: