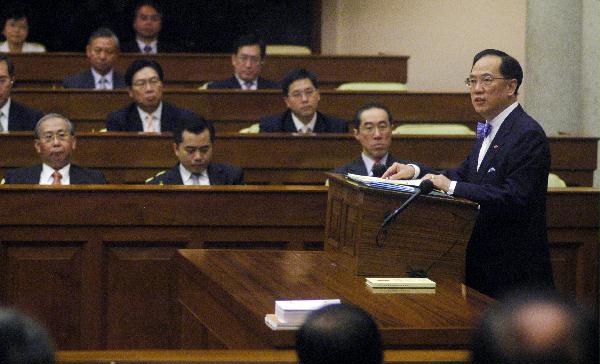 Yesterday (Oct 12), the Chief Executive of Hong Kong SAR, Donald Tsang defended his second policy address in the legislative council. The selection of next CE will be 8 months later, although it is very likely that Donald Tsang will continue his term for another 5 years. The whole process was broadcasted on major T.V channels. Let's see how the local bloggers react to his policy.

Confide in me feels that the CE is blaming the citizens while letting the corporates to get away with pollution problem:

As an ordinary citizen, after reading the policy address, I have the following feelings: the responibility of pollution is put on the shoulders of Hong Kong citizens, especially car owners or lorries drivers. However, there is no control over giant pollution sources, such as bus companies, electric companies, as well as the super giant origin of pollution (factories in mainland China). Blue sky? Are you kiddding me?

Can you hear me is very frustrated:

The policy address is really rubbish, it's all empty words again concerning environmental issue. There is no mentioning of plastic bag tax, on the other hand, it decides to collect fee for recycling! What a nonsense! Let it be… What else can we do? Let it be. They don't target at the eagles but the chicks…

The policy of education coupon is to encourage more birth. Father's world said that it would help to relieve the parent's burden:

Have more babies! Bow tie (Donald Tsang's nickname) said in the policy address yesterday that for those who have kids in non-profitable kindergarten could get HKD$10 thousands edcuation coupon. Well, 10 thousands, if it is an average kindergarten, then it can subsidy half of the school fee, not bad.

The CE still doesn't want to have legislation on minimum wage. A news report had interviewed a woman, who have to work for 12 hours a day and her hourly wage is just HKD$16 (US$2). The woman said that although she had work very hard, she could not afford the living expense of her 4 members’ family…

Christian alliance for democracy is disappointed with the missing of election reform in the policy address:

Such an important agenda has no further discussion on the policy address. It just said that the issue would be discussed in the Commission of Strategic Development and have a conclusion next year. The Chief executive pointed out that because his term would be short (8 months), he need to be practical not far fetching. However, what's the relation between being practical and ignoring the governance and political development?