Great day for Bangladesh: Dr. Yunus and Bangladesh gets the nobel prize

Wake up world. This is real. For the first time in recent history Bangladesh has made news in all the international media for a positive contribution to the world. Dr. Muhammad Yunus and his organization Grameen Bank have jointly been awarded the Nobel Peace Prize for 2006 “for their efforts to create economic and social development from below.” 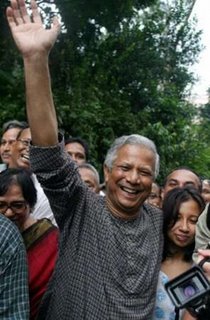 The Bangladeshi blogosphere's take on this:

People are delighted over at the Bangla blogging platform “Bandh Bhanger Awaaj“. Drishtipat has news, pictures and more links to texts and videos on Dr. Yunus and Grameen Bank. Mudhpud Chickness says Dr. Yunus has put Bangladesh on the map. The South Asia Biz says “Today is a great day for Bangladesh.” Tanvir says : “I hope that this success will allow the Bangladeshis to dream big and lead the country to prosperity.” Atunu says “Finally, a deserving Bangalee wins the Nobel Prize”. Shahidul Alam of Drik posts an wonderful tribute to Dr. Yunus. Many other bloggers shared the news and congratulated Dr. Yunus and Grameen Bank.

Although there may be some doubt on some minds why an economic model got Yunus and Grameen bank a Nobel peace prize, the Nobel committee has this to say:

Every single individual on earth has both the potential and the right to live a decent life. Across cultures and civilizations, Yunus and Grameen Bank have shown that even the poorest of the poor can work to bring about their own development.

Micro-credit has proved to be an important liberating force in societies where women in particular have to struggle against repressive social and economic conditions.

Those who are new to Microcredit, it is the extension of very small loans to the unemployed, to poor entrepreneurs and to others living in poverty who are not bankable. These individuals lack collateral, steady employment and a verifiable credit history and therefore cannot meet even the most minimum qualifications to gain access to traditional credit. (wikipedia) The success of Microcredit model comes from the upheaval of dignity among the poor and to prove that they have a potential. These individuals remain under umbrella of a closely knitted society and the defaulters face peer pressure rather than legal notices. The whole idea is to provide a decent life with dignity for the poors and it worked (sad the rich often forget that the poor also have reasons to be proud). Read more about the Microcredit from Dr. Yunus.

Professor Yunus studied economics at Vanderbilt University, where he was a Fulbright Scholar. He received his Ph.D. in Economics in 1969, going on to become an assistant professor of Economics at Middle Tennessee State University the same year. On returning to Bangladesh he joined the Economics Department at Chittagong University.

Mr Yunus set up Grameen bank in 1976 with just $27 from his own pocket. Thirty years later, the bank has 6.6 million borrowers, of which 97% are women with a repayment rate of more than 90%. Grameen Bank models have been replicated in many countries of the world.

Listen to Dr. Muhammad Yunus's reaction from an interview given to a Norwegian TV in a podcast.

The other two Bengalis to win the Nobel Prize were Rabindranath Tagore (Literature: 1913) and Amartya Sen (Economics: 1998).

Dr. Yunus's daughter Monica Yunus is a budding Soprano in the USA.

Dr. Yunus said once “One day our grandchildren will go to museums to see what poverty was like.” I hope his dream comes true some day.

Today, I am proud to be a Bangladeshi too.