The Week that Was – Bolivian Blogs

The Bolivian blog community continues to grow by leaps and bounds. In addition to its own website, Blogs de Bolivia, where new blogs are added to the blogroll on an ongoing basis, there is a Yahoo! groups specifically for this community to communicate amongst themselves. Another blog project was created in December of 2005 as a form of collaborative interaction, which has attracted the interest of many Bolivian bloggers.

El Punto de Vista (Point of View) is, according to its own description, a “participatory project that shows a view from one’s window.” The site’s creator Patricia Vargas blogs at påt®i©iå, which is a blog devoted to art, urbanism and architecture. The site invites anyone to send in pictures from one’s own window and sharing what they see on a daily basis.

Members of the Bolivian blog community have especially taken an active interest in this project, such as Javier Rodriguez, a blogger at Diario de un Demente Frustrado (ES), Ron Del Dia (ES) in Santa Cruz also provides images from various locations, and Toussant, a blogger at La Voz de La Inconciencia (ES). However, the photos are not limited to views from Bolivian windows, as photos from Argentina, Peru and Romania also are included in the site. 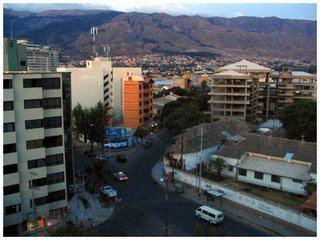 Recently, the site was featured in an article the Santa Cruz newspaper El Deber. The coverage helped revive the project after a two month layoff and caused traffic to spike as a result of the mention in the newspaper and website. This is only one example of a way that members of the Bolivian blog community have collaborated to produce a new and exciting project using these new social software technologies.