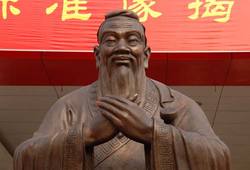 The new, standardized statue of Confucius was unveiled on September 23 by the China Confucius Institute. Here are some reactions from the blogsphere:

Xiong pei-yun points out that the standarization is against Confucius teaching:

Confucius has taught the artists, “you know what you know, and you know what you don't know, this is true knowledge”. Put into the context, whether or not you know how Confucius looks like, the simple answer is yes or no, you have to be honest. Obviously putting golden sheet on Confucius face and giving out Duke Guan's mask, are pure pretentious acts, spoofing Confucius.

It is better to miss rather than to see. Making Confucius into stature, when the status is designed by the Confucius Institute, then it becomes “standardized”, and therefore defines others “not standardized”, such logic has suffocated other possible imaginations of Confucius.

Nameless big bull in bullog says that the event reminded him of the past campaign in “Criticizes Lin Biao and Confucius”:

Some people in our country like to remind others, especially Japanese to remember history, however, we usually choose to forget history. Now that we praise Confucius again, it is neccessary to re-post the crazy history of “criticizing Confucius”, so that the next generation would know that their grand fathers’ generation has a 30 years drama in criticizing and praising the Confucius.

He cia tou describes the standarization as plastic surgery. Here is his outraged conclusion:

The whole thing is: cutting your dick to serve God — it is offensive to God and you hurt yourself terribly.