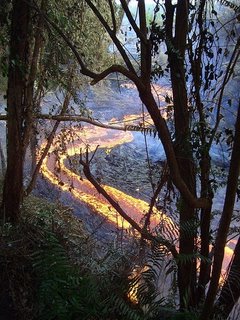 Alongside the Democratic Republic of Congo, Reunion a French Overseas Department located in the Indian Ocean to the East of Africa has one of the most active blogospheres in the francophone world. Its portal Reunion Permanente either explains the bustling activity or illustrates it. The portal even keeps track of overseas Reunion bloggers such as Sandy of Reunion-USA2 who lives in the United States; her blog seeks to explain her reactions to American culture. One particularly prolific island-based netizen, Pierrot Dupuy, keeps a blog updated several times a day that focuses on the island's and nearby independent Mauritius’ current affairs. Another blogger, Jean-Paul, summarizes the island's main news on his blog Dijoux.re every sunday.

Recent preoccupations in the country's news and blogs have included a local Chikungunya fever epidemic and its effects on local tourism, frequent mostly scenic lava flows of the local volcano of which France-based blogger Audrey from Reunion Passion consistently shows pictures. A recent alleged corruption scandal involving local official Samia Badat was also widely blogged by Zarabes, the blog of the local Indian moslem community. (Ironically, as the blog's header explains, the creole word Zarabes which is used on the island to designate the mostly moslem Indian population actually derives from the French word for Arab.) And it should come as no surprise that the sometimes tension-filled relationship to France, including a successful fight against housing discrimination practices perpetrated in mainland France against overseas French citizens from Reunion, Martinique, Guadeloupe, Guyane and other French overseas departments and territories, constitutes a recurring theme.

Among the week's highlights, Jean-Paul at Dijoux.Re, offered (Fr) the latest on the local volcano, namely that it is still erupting but that local authorities have been preventing locals from admiring its spectacle in the last couple of years. On the Chikungunya front, the blogger explained (Fr) that two biologists have linked an anti-rubeola vaccine to a possible cure. Meanwhile, on a lighter note, US-Based Sandy at Reunion-USA2 explained (Fr) the significance in America of the interracial romance movie Something New.

(Pictured Above: 2004 Volcano Eruption, Reunion, by Hugo aka Hughes Leglise.)