We start this week's round-up with the exit of the last African country in this year's FIFA World Cup tournament (Germany 2006).

The Brazilians played a relatively good game, but it was not, according to Barry Lambert the commentator, a Brazilian team that could not be beaten.

Ghana took more shots than the Brazilians, but the latter scored more.

The (wish I was in) Ghana journal was straight to the point: “elimi-dated”

Here's one good thing about the Black Stars’ elmination at the hands of Brazil — finally I can stop smiling politely at the un-funny slags on Ghana, things like “heh heh, where is Ghana, anyway?” and the always-hilarious rubs on how it's surprising an impoverished nation could find the energy to run up and down the field. Ghana fades back into the African obscurity that envelops most nations from the continent in the eyes of the west, and fades back into my heart as a place I've loved, and hope to love once again.

Ramblings of an African geek blogs about Ghana's earlier permission at the soccer mundial – You know I had to talk about this: Ghana 2 Czech Republic 0

Saturday was a tense day for most Ghanaians. We had already lost to Italy after playing particularly well except for a couple of defensive blunders and inability to convert our chances in front of the Italian Goal. we'd also seen the Czechs dismantle the Americans. Therefore we knew the chances of our surviving the game were minimum. Nonetheless, our country was playing Whatever happened they would have our support for the entire game. The streets were bare and everyone who didn't have to be out (as well as a lot of people who did) were in front of a TV.

Home of the mandinmories wonders why the Gambian government chooses to spend millions of dollars on building new accomodation for African Heads of State instead of spending same on the country's infrastructure: Priorities messed up

I am not one of those people who think the Gambia shouldn't host the African Union summit. Au contraire. What I have issues with is the governments indulgence in building structures that are not necessary for the successful implementation of the summit at the expense of more pressing infrastuctural needs such as the Brikama-Basse highway. 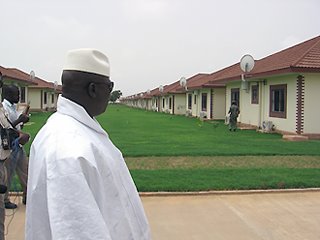 The goverment spent $5.5 million to build fifty two villas for visiting heads of states. I will argue that these heads of state could stay at the numerous hotels, pay their bills and in the process contribute to the economy of the host country. But Yahya will have none of that and in the pursuit of grandeur and infantile economic thought, he decided to spend that much money to build villas for a two day summit. Here is a snapshot of the villas.

In an earlier article titled “Stuck on the fringes of the knowledge economy”, I pointed out that although Cameroon had the potential to become a technological power house in central Africa, it had so far failed to exploit this potential because of a lack of leadership and vision. As a result, Cameroon was missing out on the benefits of 21st century technological advances in general and the knowledge economy in particular — both of which held the keys to sustainable socio-economic development and membership in the global economy.

A study by the RAND Corporation released early this month comes to reinforce this argument by painting a rather gloomy and bleak picture of Cameroon’s technological position in the world. According to the report titled The Global Technology Revolution 2020, Cameroon is among the world’s scientifically lagging countries — alongside Fiji, Chad Nepal, etc. — which have “have fewer drivers for, and face many more barriers to, technology implementation,” and are also “burdened by problem-plagued political systems, a lack of resources or infrastructure, and class disparities.”