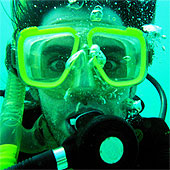 (he doesen't surf the internet, he dives into it!)

Leo Prieto has blogger activism in his DNA. He has lived in countries like Thailand and Holland, and now resides in Chile. He has personally taught more than 2,000 people in Chile to better understand “Web 2.0” and use blogs. He has several projects, from a start-up focused on developing web applications, called Aardvark (ES), to a network of sites which he owns and operates, including FayerWayer (ES), Saborizante(ES), Nuyorker (ES), Zimio (ES) and his personal blog (ES) , that recieve almost half a million readers a month. Along the way he has been very active on major issues involving the democratization of technology in Chile.

GV: Leo tell us about the blog workshops

LP: We did these workshops with Fernando Flores (ES) for ten months in 2005. We started by giving the participants a view of the future, and by motivating them to get involved in being part of it. Then we taught them how to use blogs and other empowering tools that are available for free on the Internet. They all left the workshop with their own blog. In Arica, for example, some of the students that took part in the workshops, later put on their own workshops, thus teaching more people.

Since then, a lot of new communities have appeared. Like “Cloggers”, in Concepción. My first lecture involving blogs was in 2004, specifically about Creative Commons and the freedom of information. So you could say that I have been participating in the blog conversations since late 2004, but it wasn’t until I met Mr. Flores that I understood how important it was to get everyone in on this.

GV: What are your impressions of Chile's blogosphere?

LP: At first blogs they were something weird, now they are more professionalized. The blogosphere started with a handful of individuals, early adopters. Then Atina Chile (ES) started talking about blogs in Chile. Even though it is not widely recognized, Senator Fernando Flores introduced this conversation into the Chilean public agenda. So, there is a blogosphere before and after Atina Chile. Before, we blogged without knowing or recognizing other Chilean bloggers. Now a lot of them know each other thanks to this conversation generated through Atina Chile. I met Roberto Arancibia (ES) there, and he has blogged since early 2003 – he actually started his blog almost a week after I started my own. Later on, Atina Chile started doing blogging workshops, so a new generation of bloggers sprouted from there. There are different communities of Chilean bloggers. A group of bloggers appeared in reaction to Atina Chile, who didn’t participate in the workshops, but started blogging thanks to all the noise that was made. Groups like the Chilean band CHC (ES), for example, use their blogs to promote their concerts and upload their songs. It’s amazing to see how people show up to their concerts, only aware of them thanks to the blog, and then sing along to all the songs. Original Hamster (ES), another musician, does the same thing. I see blogs as a powerful new media that can compete directly with TV or radio.

GV: How do you see Chile's possibilities with communication?

LP: There are two main issues that concern me, broadband and high definition television. I think people should start taking broadband very seriously, and get concerned about this issue. Citizens should demand broadband as a right. I talk a lot about this subject, trying to promote my concern through the radio, newspapers and blogs. Together, with Atina Chile, we have gone to see the Chilean Sub-Secretary of Telecommunications, to express our interest in helping the Chilean government in achieving “Broadband for All” (Banda Ancha para Todos). In Chile the telecom companies sell broadband, when it isn’t. They sell Internet connections at speeds ranging from 128 Kbps to 800 Kbps as broadband. This is false advertising, a lie. According to the ITU, broadband starts at 1.5 Mbps. So the first thing that should happen, is to make a law that regulates this. So companies don’t trick their users into believing they have something that isn’t what they expect. Today real broadband (1 Mbps and up), is a luxury. This must change, it has to be the starting point for any Internet connection.
Also, this “minimum speed” has to increase as time goes by. So in 10 years, the basic broadband connection should start at 25 Mbps, or hopefully more.

Public schools have 128 Kbps connections. Most of them are connected thanks to an initiative from Education Ministry called Enlaces(ES). These programs got all the public schools online. But 128 Kbps is not enough, specially if you are sharing. They need true broadband. Since the program started, ten years have gone by. If they had broader connections, public schools, medical centres and municipalities could be the Internet hubs where neighbours and citizens could get online. The fact is that this will allow people to get motivated and be a part of the information society. Governments have to be serious on this issue. In Korea, for example, the government took it so seriously that now 75% of the population have broadband Internet access. In Chile that figure is close to only 0.5%. One of the ISPs, Telefónica (ES), says that 4.000.000 Chileans have internet access. But that doesn’t mean in their houses, in most cases it means the can access the Internet where they study or work. Cisco, the broadband equipment manufacturer, says that 800.000 people in Chile have broadband, but that is counting connections as low as 128 Kbps. If you only count connections of 1 Mbps or higher, that number goes down to 70.000 in a country with a population on 15 million.

Chile is in a privileged position today. It’s the Latin American leader in information technology but we are loosing this advantage because the government doesn’t have a master plan to keep this up. During the Ricardo Lagos administration, a lot of research was done on the issue, but the actual government doesn’t recognize that research, and wants to do it again! The four years of this goverment is not enough time to do new research, develop a plan, and deploy it! President Bachelet said in her speech of the 21st of May, that one of the four main concerns of her government would be to give people access to the information society. Let’s hope she delivers before her term is over.

LP: Because of the World Cup, a lot of people are buying a new TV. In 1962, a lot of Chileans bought colour TV's to watch the World Cup. But people today don’t know what they are buying. People don’t know the difference between a Plasma TV and a High Definition Plasma TV. There is a demand, but that demand is not real because people don’t really know what they are buying. They could be buying a beautiful flat screen Plasma TV, that won’t work with HDTV. The government hasn’t chosen an HDTV standard, so the TV channels can’t publicize these services, and so the stores don’t either. If the government and the TV channels don’t get their act together, this will never happen. Today no South American country has high definition. In Brazil, a cable operator will air the first high definition transmission in this part of the world fo the 2006 World Cup, in June. We could have been first.

GV: Are we loosing our ranking in the technology sphere?

LP: If we want to be the technological leaders in Latin America, we need to achieve four things: low cost computers, public broadband Internet access, promote freedom of information and open source software. Chile was one of the first countries in the region to offer cellphone services. Historically we have been in the forefront of technological deployment in South America, but now we are loosing it. Argentina and Brazil commited to the “100 dollar laptop” that Negroponte is promoting. Chile said that we have to think it over, and decide on another solution. Think about what, which solution? After all the schoolchildren in Argentina in Brazil have laptops, then will we decide to do it?

Brazil sees the force of Linux and Open Source Software and invests on that, on developing their own “flavor” of Linux, adequate to their needs. Their government decides to promote Creative Commons and the freedom of information. Our government’s official advisor on these matters is Microsoft! One company that will obviously promote their own products. In other words, Chile is missing the chance to take part of the enormous open source community, and instead commits to one company’s view. If the Chilean government promoted Free Software, we could have our own version of Linux, an incredibly powerful free operating system, instead of promoting a crippled version of Windows.