This week in Nigeria

This week's round-up of Nigerian blogs starts with Naijablog (exp)‘s assertion that Nigerians change their political language and thinking. His post is titled: “The sterility of political discourse in Nigeria“

Nigeria at this time desperately needs a new political language. Instead of 3rd term, South-South vs North etc, fiscal federalism, percentage deviation blah di blah, its time there was talk of transformation, nation-building, planning for the next ten or twenty years, free education and healthcare for all, job creation strategies, concern for the environment and fostering innovation. Surely the next administration should win on their vision for a united Nigeria with jobs for all, not on the basis of petty tribalism and greed.

The feeling about Nigeria continues with another blog, Just thots by a naijaman. This blog looks at the a Nigerian forum called “Nairaland” and also highlights the true spirit of the Nigerian: “Nairaland and the Nigerian Spirit“

Nairaland would probably take the dubious role as the beer palour for all internet loving Nigerians and friends of Nigeria. A watering hole to unwind, discuss burning national and international issues, sports, family, health, romance, entertainment, technology and jokes.

It is not hard to note that a majority of highly active members are Nigerians in foreign lands, those who are trying to reconnect with their fellow country men and those who wish to stay in touch with current issues at home.

Kazey's Journal takes a critical look at the Nigerian government's decision to run ‘Made in Nigeria’ software.

Did I get the news report right? Or is it the FEC, that are too stupid to understand that saying something like “Made in Nigeria software only” is not only vague but a sign of IT illiteracy? Or maybe it is just me been too excited about the whole news report. Still can’t figure that out. 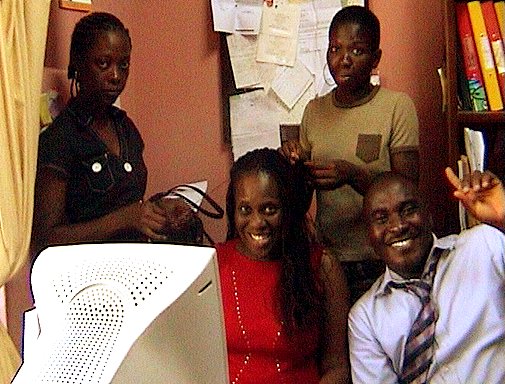 With Joke Silva (Jacobs) today as she combined having her hair braided and working on the desk top. Joke Silva (in red), one of Nigeria's finest actresses of all time, learnt her craft in drama school while in the United Kingdom . She has worked in radio, tv and drama for many years.
She was part of the Cast (and also the Producer) of the production of Eve Enslar's Vagina Monologues in Lagos about 3 weeks ago.

Even though the dissappearance and re-appearance of former Liberian president, Charles Taylor, happened last week, some Nigerian blogs are still look at the issue. Gradiose Parlor asks: “Did Charles Taylor Received Help From Top Nigerian Officials to Escape?“

Taylor definitely received some help to escape; however, to assert that his escape was probably orchestrated by the top hierarchy of the Nigerian security forces is troubling and warrants a thorough investigation.

Aba Boy bares his mind about the Charles Taylor saga.

Firstly, I will like to applaud the Nigeria security services for the exceptional job that led to the capture of Mr Taylor. How these guys managed to track him to a village on Nigeria's border with Chad still defies principle. For OBJ whose trip to America (and few minutes with G. Bush) would have been dominated by the Third term agenda, what a stroke of ‘luck’ Taylor goes missing before he lands in Gods own Country, and a few hours before his short audience with “W”, the competent Nigerian Security Services find Taylor in a lone car with his wife. So for the duration of the visit, all talk about the third term gets knocked off the agenda, and Charles Taylor hugs the headlines. Even the great Spielberg couldn’t have even made this up.

Aladejebi Ayodeji's blog is unhappy that Internet access was not part of the questionaire during the recent national census in Nigeria. He wonders: “Why Was Internet Access Count Eliminated from Census?”

Census, Census, Census….counting heads of all Nigerians. However i was shocked to discover that in all the questions asked, there was nothing like…”Do You Use or Have internet Access?”. Why would this question not be part of the survey being done by NPC? Dont they know that this statistics is relevant in times to come. I think having this kind of statistics would have been used to help IT companies project what the future of IT will be.