This week marks the first week of the Muslim holy month of Ramadan, a month that evoked varied feelings among the Jordanian blogosphere, a good sign that it is indeed a melting pot of mentalities. Hala of CafeLulu says that Ramadan to her is a month where people “come closer together as people, regardless of your religious background.” Eman of Aquacool wishes everyone a blessed Ramadan but says she wishes that one day the “Muslim world will unite and start fasting all together on the same day as it’s supposed to be“.  Mozzy, meanwhile, writes a post on why he dislikes Ramadan, which results in a very interesting thread of comments. Ramadan Mubarak!

The Jordanian blogosphere is also exasperated with a second round of internet censorship in Saudi Arabia that blocked file-sharing network Flickr and blogging service provider Blogger. Camels are also making an appearance- Natasha Tynes has an article on camel jockeys and Iyas of Jameed is in disbelief over a story of bestiality.

Dealing with more local affairs, Lina of Into the Wind says that “I always enjoy reading blogs of expats in Jordan”, and Khalaf has a post on the reason behind the latest earthquake rumor while Haitham Sabbah says, “Minor earthquake, and major oil price increase” .  Naseem Tarawneh talks about Jordanian electoral system history, present and future, and Issam Smeir suggests that Jordan adopts the American political system and “to establish only two big parties, the Jordanian Democratic and Republican parties”. Firas of IHeartAmman has a very interesting post on the government's respone to a nuclear reactor in Israel.

Roba Assi has some pictures from the last Jordanian blogger meet-up. 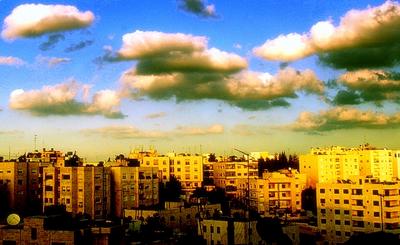 On the creative scene, Tololy is playing a little game on her blog- email her any word or phrase and she will get creative with them- the first phrase being “pixie dust”. Ahmad Humeid has a wonderful article surveying the future music landscape, and Ibrahim Owais is starting a string of posts dedicated to Middle Eastern ads as he thinks they are underrepresented online. Amin Matalqa tries to answer a question a lot of Arabs are often asking themselves- “Why are most Arabic films bad?” ,Yazan Malakha has a very creative post on blogging, and Jad Madi has created a Joite, a website aggregating Flickr feeds tagged with Jordan, Amman, Petra, Jerash, etc.

Haitham Sabbah of Sabbah's Blog published his interview about blogging in the Arab world with Italian press.